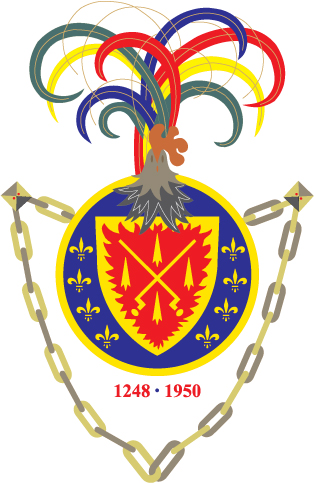 La Confrérie de la Chaîne des Rôtisseurs is an international gastronomic society founded in Paris in 1950. The Chaîne is based on the traditions and practices of the old French royal guild of goose roasters, whose authority gradually expanded to the roasting of all poultry, meat, and game. Revived in 1950, the society has professional and amateur members in more than 90 countries worldwide. In the United States, there are nearly 130 bailliages (chapters), each offering a variety of culinary activities to suit the interests of local members.

Since its rebirth, the society has grown dramatically, spreading its influence and presence worldwide. Today, the Chaîne brings together professional and non-professional members from around the world who share in the “spirit” of the Society and who appreciate and enjoy wine and fine dining. While a confrérie is a “brotherhood,” women have always been welcome and they take an active role in the Society. Within the Chaîne there is also the “L’Ordre Mondial des Gourmets Dégustateurs” for those members who have a special knowledge of, or interest in, wine and spirits.

The international headquarters (Siège Mondial) remains in Paris where the society was founded, and the present day Chaîne des Rôtisseurs is still based on the traditions and practices of the ancient French brotherhood but now in an international and contemporary context.

The organization is represented by its 24000 members in 80 countries around the world. In these countries, it is organized in national sections (called Bailliages) with regional subsections.

If you would like more information, click the contact link above to send a message and we will be happy to get back to you with answers!